The Passengers by John Marrs 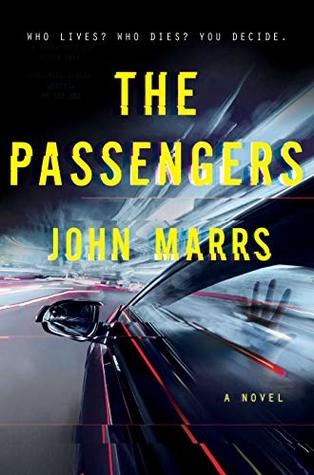 Source: I received a review copy from the publisher in exchange for a honest review.


Just as self-driving cars become the trusted, safer norm, eight people find themselves in this terrifying situation, including a faded TV star, a pregnant young woman, an abused wife fleeing her husband, an illegal immigrant, a husband and wife, and a suicidal man.

From cameras hidden in their cars, their panic is broadcast to millions of people around the world. But the public will show their true colors when they are asked, "Which of these people should we save?...And who should we kill first?"

I hope I’m not being too presumptuous by saying that driver-less vehicles are the future. We already see some aspect of it in the Google and Tesla cars. In Marrs’s latest thriller, The Passengers, Marrs paints a world where the emergence of autonomous vehicles are mandatory and the new norm. Say goodbye to human-error accident, traffic, and fuel consumption to name a few. Manufacturers and The Government assured the citizens that the driver-less cars are extremely safe and un-hackable. All good, right? Nope. The opening chapters shows eight hijacked autonomous vehicles with everything televised and broadcast all around the world. Giving the everyday citizens the right to be judge, jury and executioner on which passengers lives or dies.

The Passengers is my first Marrs novel and I must say, I am beyond impressed. While the concept and highly plausible potential of hacking technology isn’t quite new, Marrs took the idea and created an incredible and engaging plot that had me at the edge of my seat the entire time. I absolutely loved the writing and formatting of the book. Marrs timed and executed the chapters and passengers’ revelations perfectly. Marrs ended each chapter with just the right amount of information and detail to entice the reader guaranteeing that they’d continue along with the story. I know I was. I kept telling myself ‘just one more chapter…’. Readers were treated to various point-of-views, alternating chapters between the passengers and jury member, Libby. I’m usually not a big fan of multiple POVs but in this case, it worked well. I felt like I was getting to know each and every character intimately, their feelings and emotion so palpable they lept off the pages. Definitely a character driven novel, we delved deep into human behaviors.

On top of the driver-less vehicles, social media played a significant role in the story. In this day and age, the majority of the world is on some sort of social media platform or another. There isn’t a second that goes by when someone isnt’ sharing or exposing some part of theirs or others’ lives. Everyone has an opinion for everything, even if it’s unsolicited. What’s crazy and scary about Marr’s novel is that it’s all so freaking plausible. Most technology is indeed hackable but combine that with social media…and it’s an entirely different beast. In The passengers, strangers world-wide chimed on the fate of the passengers, making judgments, and deciding who lived or died based on basic thread thin facts. Sounds familiar right? Marrs did an excellent job at capturing that real world reality.

All in all, I really enjoyed The Passengers. It is without a doubt a masterly well-written thriller. I call it now, The Passengers is going to get an adaptation some time in the near future! I highly recommend The Passengers, it was unputdownable! I can’t believe I haven’t read anything else by Marrs but I plan to remedy that soon.